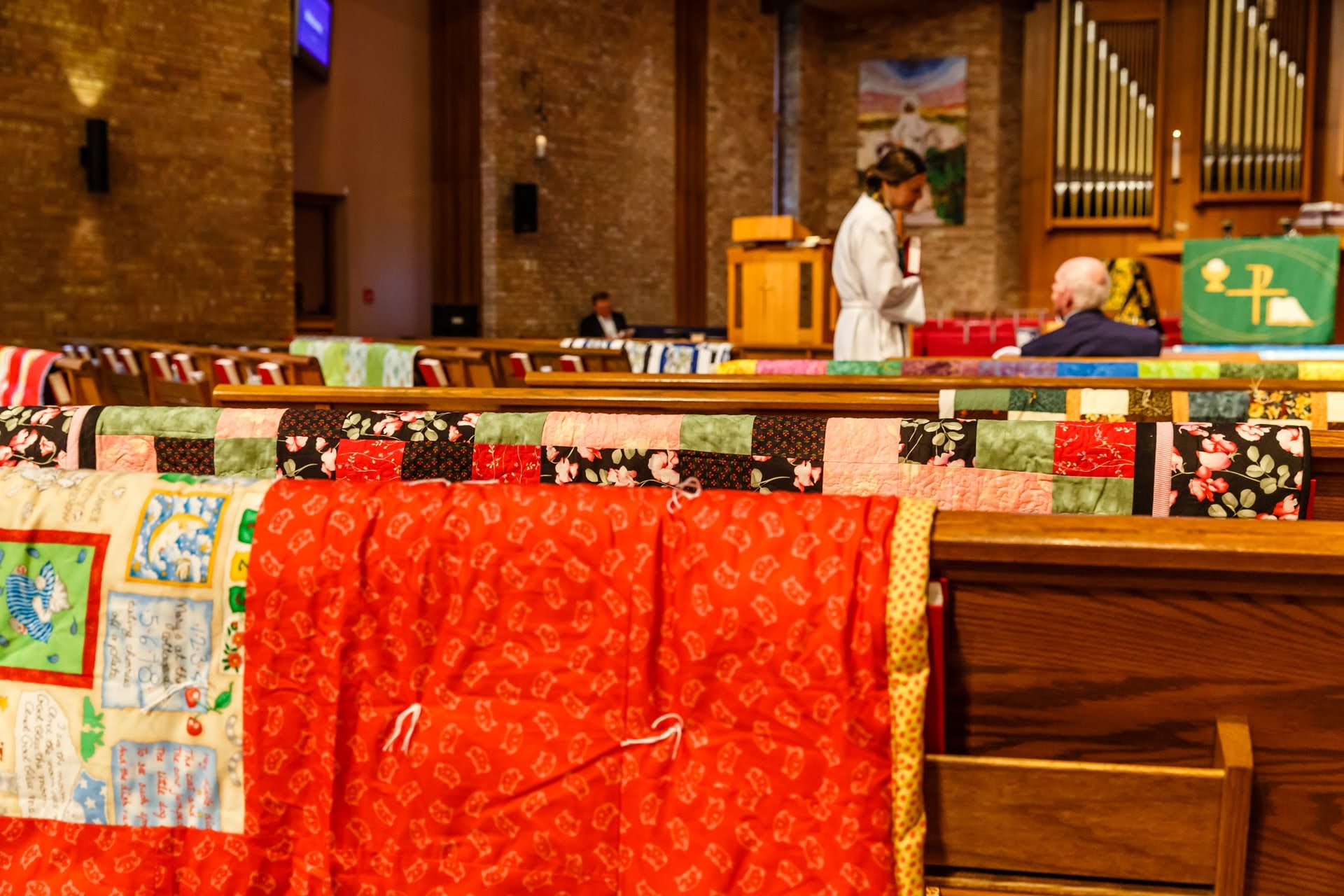 From an Idea to a Mission

In February, a woman asked about creating a quilting ministry here at Good Shepherd- with the idea that the quilts would go to Lutheran World Relief.  We had an initial meeting- gathering a group of about 15 or so- and started figuring out what it would take to make this happen.  Naming our group after a member of our church who created the beautiful quilts up front – “Norma Jeanne’s Quilters”.  Our goal was to gather, sew, tie and finish 10 quilts this year.  Well you can see that we far exceeded that- between here and the Verona campus there are over 60 quilts.  These quilts are signs of God’s love in the world.  I can’t emphasize enough how amazing it has been to see these quilts go from an idea to these beautiful pieces of art and love, about to be sent out into the world.  We don’t know where they are going to go and we don’t know the people that will receive them- but even so, we have been praying for these fellow children of God.  We had this goal of making 10 quilts and when we got to 10, the quilters didn’t stop and say- okay we are done- we just kept making them.  It was the caring for others that pushed us on.

Today, Jesus is speaking about matters of relationships, especially pointing to the limits we impose on them. In this section from Mark on divorce it says that divorce isn’t allowed followed by a scene where Jesus blesses children- which is against the norms of the time.  On the surface, these stories don’t seem to go together-and the words themselves, especially on divorce seem to set up strict limits for us. But if we look more closely at the context- Jesus isn’t imposing new laws on us, instead he is opening up the kingdom of God to include more people.  He is extending grace to people who weren’t included before.

God is about giving us Hope

The Pharisees, the ones who kept the law, in Jesus’ time are testing Jesus using this question on divorce, but ultimately challenging whether or not Jesus will go against the prophet Moses.  He doesn’t and in fact turns it around on them pointing back to God and what God wants for people.  We know what God wants for people- God wants people to have faith and care for one another.  This reading from Mark has been used to judge people, saying that divorce is never allowed, but is that really the point?  From bigger picture within the book of Mark- Jesus has already challenged Jewish laws; laws about eating and healing the unclean on the sabbath no less and the laws about interacting with people from foreign lands, including women.  When Jesus is talking about the law, he ends up pointing to what is really important- loving God and loving others.  If we are people of faith, who believe in a God who values relationships, love and compassion- if we are people of faith who know we ourselves cannot fulfill the law and that we need God’s grace- then judgment cannot be Jesus’ goal here.  Martin Luther and the reformers wrote about the overall purpose of scripture, saying, “However, any interpretation of Scripture that weakens or removes our hope and encouragement is certainly contrary to the will and intent of the Holy Spirit.” (Book of Concord, Solid Declaration, Article XI: Election) … the Word of God is all about giving us HOPE.

So when Jesus says that divorce is not lawful, what is he talking about?  The law of Moses regarding divorce was that a man could dismiss his wife for any reason by writing it down and giving it to her.  That was a legally binding divorce.  A woman could not do the same.  A woman didn’t have the same rights as a man when it came to owning land, earning money or receiving an inheritance.  Jesus saw that.  He knew the injustice of the situation for people who were not in power- in this case, women.  And here, in the book of Mark, when he was challenged by the Pharisees, he calls them out on their lack of compassion and hardness of heart.  If women were to be cared for and considered equal in his time, divorce couldn’t be an option because women didn’t have the same legal rights as men.  A divorced woman would certainly have a difficult time in life- with few options.  What looks like a limitation to us- becomes an opening up of power and inclusion of women as equals in their marriage relationships.

So what about us today?  Earlier this year I attended an event held at DAIS the Domestice Abuse center in Madison.  The event was for faith leaders specifically to come together to hear stories from survivors and to get resources on the important topic of domestic violence in our community.  The Bible and particularly passages like this one continue to be used to keep people in unhealthy relationships.  If someone cannot get divorced, but the relationship is an abusive one, that doesn’t leave any options.  If relationships between people are meant to be respectful, loving and supportive- and if the word of God is meant to give us hope- and if Jesus continually looked at laws and spoke on behalf of the kingdom of God- we know that not allowing divorce doesn’t fit for us today.  Abusive relationships don’t fit into God’s purpose of marriage or any other relationship.  In marriage, God intends for 2 people to support and care for one another- to care about the needs of the other and bear each other’s burdens together.  Our closest relationships are sacred, God-given relationships.

After Jesus makes his point about divorce, there is a scene about how to treat children.  In a time and place when children had no value, here is Jesus spending time with them, blessing them and reminding his disciples that children belong to God.  Can you imagine the controversy of this scene?  Jesus, a teacher with many followers, someone who was known to have a lot of power- and he focuses not on the adults or the other men who were of equal status and education- men who had money, power and authority- but instead, Jesus gives his attention to the children.  The ones who weren’t valued because they had nothing to offer other than themselves.  Jesus blessing children and lifting them up as examples of faith reminding us again that we have more limitations to open up, more barriers to break down and more people to include in the kingdom of God.

All People are Created by God

My son, Griffin, isn’t quite 2 yet, but I know he has a lot to teach me.  When we are out around town running errands or on our way somewhere- like many small children, he has the gift of noticing.  He notices airplanes or birds in the sky and points at them, he notices trucks and excitedly yells out “truck” and he notices people.  One of Griffin’s favorite things to do is to wave at people.  It doesn’t matter if we know the person or not (in fact he waves only when he wants to).  He simply notices people and waves at them- and when they notice him and wave back- he lights up.  In Target once, he stood near the entryway and waved at each person who came in- I couldn’t pull him away- he had to say hi to everyone who came in.  Most people were rushing trying to get their errands done and didn’t notice him standing there.  But a few did- they went from rushing past to instead pausing to wave and smile at him.  And one woman even stopped got down at his level to talk to him.  Suddenly there was a connection built- the spark of a relationship- all because he noticed people and thought it was worth it to greet them.

In this story about divorce and blessing children- Jesus reminds the Pharisees and the disciples and us -that all people are created by God and that our relationships are sacred.  The people we are in closest relationship too- our children, our spouses, our parents, our friends- and people we don’t know at all- were all made by God with love.  These quilts around the sanctuary today are another sign of how we care for people we may never even meet- but we honor them in creating and giving these quilts.  One commentary put it this way, “We have no business treating anyone as if they were not made in God’s image.”  When it comes to relationships, Jesus reminds us that we are beloved children of God- all of us and we have choices in how we treat each other. Jesus opened up the kingdom of God to include people we might not include.  Thanks be to God for creating us, loving us and reminding us we all belong again and again.