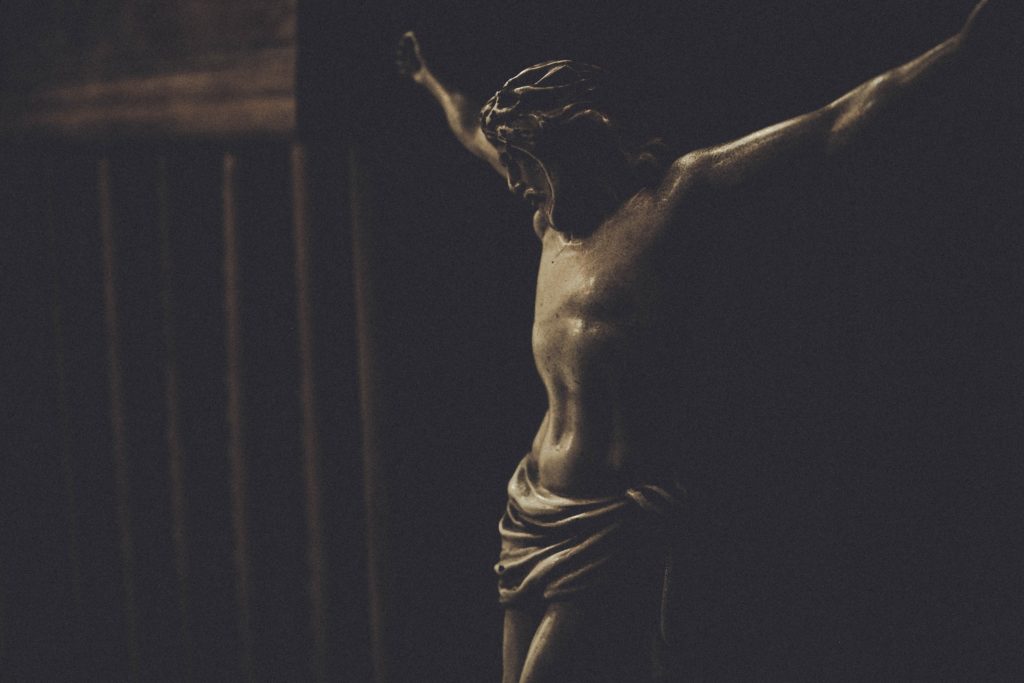 Why did Jesus have to die? The first story of our sermon series on BELONGING weeks ago welcomed us into some private teaching between Jesus and his disciples. It was first of 3 times Jesus predicted his impending betrayal and execution and resurrection. And Mark tells us the disciples were blind to all 3 and afraid to ask Jesus to explain.

One question that would’ve been great to have straight from the source…“Jesus why do you have to die?” What’s the point, what’s the plan…Without a clear answer we’ve been left with centuries of theological debate & biblical interpretation that has produced what we know in the church as the Theory of Atonement.

Origen of Alexandria was 1st to define The RANSOM theory of Atonement in the 3rd century which explained Christs death on the cross as a debt paid to Satan for the liberation of humanity. In the 11th Century Anselm of Canterbury gave us the Substitutionary Theory of Atonement. Which is a theory still prevalent in the church today, it states…”Christ suffered on the cross as a substitute for the sins of humanity, satisfying God’s wrath against us for all our transgressions.” Christ was a stand in… A stunt double for you, Christ died for your sins, specifically.

That is a big statement, a massive claim upon the reality of our faith & existence, especially if you didn’t grow up in the church, So I want to try and unpack this a little through the lens of Confirmation & Baptism & the Cup.

Intrigued by the humanity and divinity of Jesus

You know this is in many ways the busy season for your pastors & staff at Good Shepherd. The holidays are upon us, Church School has started, confirmation classes have started. My oldest son has begun his first year of Confirmation, which is still freaking me out! So every Tuesday and Wednesday night one of your pastors is here and in Verona teaching about 150 of our youth, your kids, about Jesus. So I asked my sixth grader what he learned in confirmation this week, and surprisingly he said, “Well dad Pastor Sheryl talked about how Jesus was both fully God and fully human. I have to admit it was pretty intriguing. She definitely had my attention.” HUH!? He has never said that after one of my discussions by the way.

But it’s an important conversation we need to return to again and again. Fully God and fully human, fully saint and fully sinner. Jesus was the Son of God in all his Glory…But he was also fully human, in all our brokenness… He got frustrated, he got tired, he needed alone time, he called his best friend Satan, he kicked over tables and called out people he didn’t agree with. Some say he may have even had a temper!

His divinity is fully on display in the theories of atonement we discussed. For only the truly divine could take away the sins of the world. But I think it is in discussions about his humanity where the cross becomes so amazing… So much more than a ransom or substitution for my selfish choices and bad decisions!And today we’re looking at a couple passages that gave birth to theories of atonement. Our first reading is Isaiah’s suffering servant is seen as the very prediction of Christ, Has become emblematic of Christ’s death on a cross. Which is why it’s fascinating, in our story, when Jesus is going toe to toe with James & John. Two of those in his inner most circle, the ones he took up the mountain to the Transfiguration. The ones he will invite to pray with him at a Garden in Gethsemane. When he’s trying to explain to them why they have no idea what they are asking for… When they ask Jesus “Grant to us that we may sit, one at your right hand & one at your left.” In other words, get rid of this Peter guy, remember the one you called Satan, and let us takeover as your number 2 and your right-hand man.

But his answer is fascinating with how we think about Christ and the cross, Because Jesus doesn’t say, are you able to be crucified into the crucifixion I am crucified with? No, he asks them, are you able to be baptized with the baptism that I am baptized with???  Are you able to drink the cup that I drink??? Baptism or absolution was an established practice in Jerusalem throughout their history, But it was usually a practice done by the individual, a purification or ritual cleansing. John is the first one to show up talking about REPENTANCE & FORGIVENESS of sin. One author describes that “JOHN was the one, who got the idea to invite people to confess their sins & submit themselves to a rite of purification performed upon them by another.”

This is where Mark’s gospel begins, there’s no Virgin Mary, no babe in a manger, no wise men. Instead we’re told the entire country was coming out to the river Jordan to be baptized by John. But John says one is coming who will baptize you with the Holy Spirit. And Jesus shows up to be baptized, and in the process the Holy Spirit descends upon him like a dove and then immediately drives him into the wilderness. In baptism we are witnessing in person the work of the Holy Spirit.

Continually Empowered by the Spirit

That is what happened here today, with the baptisms we saw. It’s why I think sometimes it’d be more appropriate to give the parents seat-belts or hard hats. Buckle up you just invited the Holy Spirit into the life of your child so get ready. And as a community you all agreed to support these kids. Through church school, and confirmation, & youth group, or lack thereof! Through early adulthood and marriage and divorce and in sickness and in health, in work and play and retirement, in life and in death. We’ve made a commitment as a community to support one another, I don’t care your age, I don’t care your affliction, seen or unseen. There is nowhere along that spectrum from cradle to coffin that you are outside the scope or reach or power of the Holy Spirit in your life and we are called and empowered by the spirit to support one another along that journey.

And we have the benefit of knowing the rest of Jesus’ story when hearing this one today, We know in the end the ones at his right hand & left hand are two thieves on a cross. Mark tells us the cup Jesus drank was made up of a sponge on a stick… filled with sour wine…Very similar to the Mogen David we use at during Communion…but these theories of atonement beg the question, Does sacrifice lead to freedom??? Does sacrifice lead to love??? Or does love lead to sacrifice??? Is it love that ultimately brings freedom in our world???

The word “RANSOM” in our story today is the Greek word “LYTRON” And throughout the Old Testament, LYTRON refers to the liberation brought by divine strength. In Exodus (6.6) Deuteronomy (15:15) 2nd Samuel (7:23) in the Psalms (69:18) & Isaiah (43:14) God’s powerful love delivering people, redeeming people, setting people free. A God who acts with power by Suffering WITH as opposed to Suffering for. And following these passages and this picture of what LYTRON is in our story from Mark. What does Christs death on the cross lead to for us as God’s children???

The Last Shall be First…

Well immediately after this exchange with James & John, Jesus teaches all the disciples saying:”You know all those people we recognize as powerful and perfect in our world, those we lift up in positions of power, our “RULERS,” those in Hollywood, CEO’s, politicians, casting directors, “Senior Pastors,” Some Lord it over us, act as tyrants over us.” Well, Jesus says, it is going to be different for all of you if you follow me. Because the last will be first and first will be last. Because it’s the servant who is the greatest in the Kingdom of God, In this passage from Mark Jesus shows us that through his life and his teaching and his execution and resurrection and ascension. He shows himself to be the ultimate example of a servant who was obedient to the point of death, even death on a cross. And in this passage Jesus shows how he delivers us from the material and political powers of this world that we create to control one another. Jesus liberates us and frees us from the bondage of idol worship manifest through our social platforms and media outlets.

And maybe it doesn’t seem like a big difference on the surface, but it is… Jesus’ death as a PAYMENT VS A RELEASE… His sacrifice as a SUBSTITUTION VS A LIBERATION… And it is important to understand in our black and white world today when we are talking about the cross it’s not an EITHER / OR proposition in our faith but rather a BOTH / AND. Do I believe that Christ died on a cross for my sake and your sake and the sake of the world. You better believe it. Martin Luther’s theology of the Cross describes how it’s only through the cross we are saved, That the cross is our only source for knowing who God truly is.

But if we limit the cross to a simple transaction for our sins, we completely disregard this gift of the Holy Spirit, The Advocate Jesus promised to send after he was gone, To be with us and walk with us on this messy journey we are all on full of bad decisions and wrong turns. That spirit is given to us through the waters of baptism. It’s present with us when we share in this cup and this meal. Walks with us from cradle to coffin as we support one another & care for one another & the world God made.