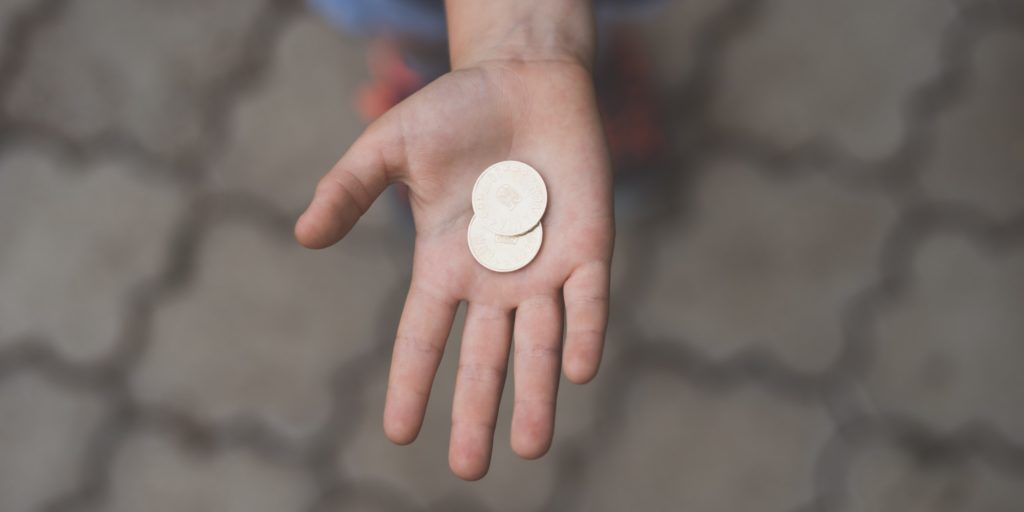 What does it look like to give without asking for anything in return?

We might know people who can live this out, but it sure isn’t easy.  As disciples of Jesus Christ, we are called to live with generosity, humility, and faith.  But how often we forget.  We have a hard time giving without asking for anything in return and when we do give we find ourselves complaining about it.  Not so for the woman in this story.

Jesus is camped out across from the temple where he can see everything going on and he spots this woman, she is poor and gives her last two pennies as an offering to the temple.  Jesus points her out to his followers (Mark 12:43).  In contrast to the scribes and really all the wealthy people in power, here is this woman giving what she has to live on to the temple.  She is living out God’s call to be generous and she is responding with all she has by giving thanks to God.  It isn’t the giving that earns her special favor, it is her faith in God that Jesus is pointing out here.

The scribes in this story, just don’t get it though.  The scribes were associated with the religious order, but were not priests themselves.  They have status and power because of their positions and they liked to flaunt it.  Jesus is calling them out in this story because the Hebrew Scriptures outline how a community should care for people in need, especially widows and orphans and they aren’t doing that.  This woman is an example of how the system is failing- how those in power are failing.  Jesus isn’t attacking Judaism itself, but instead is challenging the way that the scribes are living it out.  Jesus is pointing out the responsibility of those who have means to help those who don’t and the injustice of the woman giving to the very thing that is keeping her down.

This is not an easy passage for us because it means that giving goes beyond opening our wallets.  It means being changed and challenged by the gift of grace and responding to it with thanksgiving.  God’s grace changes us, so we are no longer worried about not having enough – and instead are willing to share with those around us because we are motivated by our gratitude towards God.

As we continue on toward Thanksgiving and we give thanks to God for all the things we have, we are also invited to think about how we can respond with thanks through our actions.  What can we do and say and how can we live our lives as a continuous “Thank you” to God?