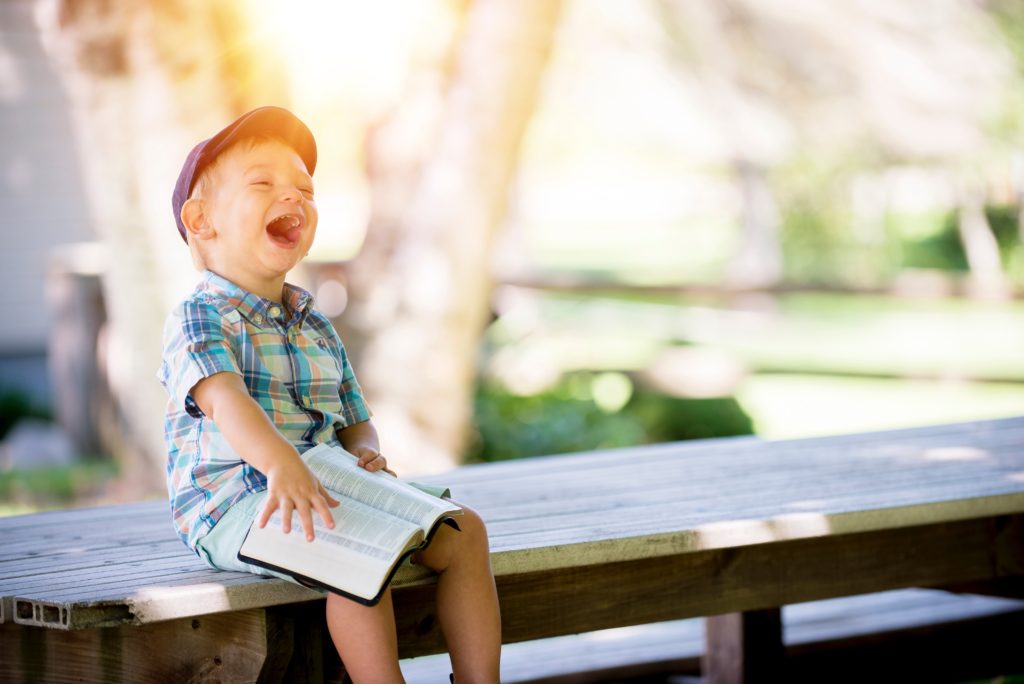 My son, Griffin, is 2 years old and is in that stage of development where he is using more words to explain how he is feeling and what he wants (thank goodness!).  We have a couple books that he loves that name different feelings and each page has a picture of a young child about his age expressing how they are feeling.  When things go his way, when he is having fun or delighting in the world around him – he now has the word for it… he simply says, “Happy!” (not “I feel happy or I am happy!”  he just says, “happy” and sometimes will follow it up with a “yay!” and clapping.) And I know that is certainly what he really is feeling at that moment.

What it takes to be happy

But with all these different messages about how we can achieve happiness, the psalmist today wants to clear it all up.  As people of faith, the message about what it means to be truly happy isn’t necessarily what we would first think of, and it might not even be what we want to hear.  Psalm 32 says that our happiness is irrefutably tied to one thing— forgiveness.  Happy are those whose transgressions are forgiven.  The psalmist continues by talking about how to be forgiven.  And it isn’t a long to do list, instead it is simply about being honest with ourselves and admitting our sins.

To make it more clear, the psalmist tells us what happens if we don’t do those things.  If we remain silent about our sins, it is going to eat away at us.  Just like keeping the truth from someone, when we know what we tell them will change the way we relate to each other.  We are afraid of breaking the silence about our own mistakes– that fear is very real.  It is why kids and teenagers are notorious for not wanting to admit a wrongdoing to their parents – they fear punishment for the action.  But don’t they also fear disappointing them, having their parents look at them differently?  In the criminal justice system, a confession to a crime will bring about a consequence.  In our relationship with God, we fear that same sort of judgement – we fear that admitting our sin will create a broken relationship that cannot be repaired. We are afraid of disappointing God.

But the thing the psalm writer reminds us of, is that we already did the thing.  We already committed the sin, made the mistake- we already have broken the relationship with God or the people around us, we already separated ourselves from our creator.  Admitting it isn’t going to change the sin or take it back.  What changes when we confess our sins, is that it no longer eats away at us.  It no longer controls us.  Admitting our sin or not doesn’t make God love us or forgive us.  Confessing our sins is for us.  It is to stop lying to ourselves about not needing God- thinking we can save ourselves.  It is admitting again that we need God, we need Jesus Christ.

Martin Luther on Confession and Forgiveness

Martin Luther and the reformers talked a lot about confessing our sin.  During his time, the Roman Catholic church had different ideas on what it meant to confess one’s sins and how to receive forgiveness.  And it wasn’t about the free gift of grace.  Luther felt tortured in trying to confess every sin he had ever committed, he wanted to make sure he got them all in- and the guilt that consumed him, it really did eat away at him because he realized that he could never admit all of his sins and so he questioned whether he would ever be free from them.  That is until he discovered Paul’s description of God’s grace in the Bible and the fact that it isn’t what we do that saves us, it is God’s action of grace through our faith in Jesus Christ that saves us.  We don’t control God’s grace and forgiveness, we can’t mess it up by not confessing enough sins, and we can’t sell it.

The Augsburg Confession, a historical writing outlining our Lutheran faith and theology, describes what it means to confess our sins and receive God’s forgiveness this way, “true repentance is nothing else than to have remorse and sorrow or terror about sin, and yet at the same time to believe in the gospel and absolution that sin is forgiven and grace is obtained through Christ.”  So, we tell the truth that we mess up sometimes and in the same breath hear that God loves us and forgives us through Jesus Christ.

When I hear the word forgiveness nowadays, I feel like it has become misunderstood and almost offensive, especially when someone speaks of forgiving the person who did them wrong.  There will be whispers about it, “And then she forgave him!  Can you believe it?”  But forgiveness doesn’t mean the person who did the wrong is let off the hook, it doesn’t mean we believe their sinful actions are acceptable and okay.  And being forgiven doesn’t mean we believe our own sinful actions were right.  Forgiveness is the gift of freedom- it is saying it is not okay that you did that, but also– that sin, that wrong is not going to control us anymore.  It is a gift of love.  And if our sins don’t control us anymore, if we recognize our need for God and God reminds us that he has been there with us the whole time- never leaving us even when we were wrapped up in our sin- then maybe happiness really does come from being forgiven.

The last verse of Psalm 32 says, “Be glad in the Lord and rejoice, O righteous, and shout for joy, all you upright in heart.”  This might seem contrary to the statement not too many verses before this one declaring that we were sinners, silent and then confessing, consumed with guilt – but happy because we were forgiven.  But now we are being called “righteous” and even “upright in heart”.  That term righteous can bring up for us – how we most often hear it used, usually because someone is accused of being “self-righteous”.  Making us think of a person who believes they are morally superior to us, someone who is judgmental or hypocritical.  But the Bible references the “righteous” people of God… a lot.  To be righteous people of faith, is not about being morally superior (how could we be anyway?) and it isn’t about behaving correctly or acting a certain way to achieve a goal, it isn’t even about judgment or justice.  Righteousness is about fulfilling a relationship with someone else, more specifically it is defined as “fulfilling what the relationship demands of us” and we know that different relationships require different things.

Our relationships with our family has different demands than a friend, which is different than a someone we just met or a stranger.  Our relationship with God does demand one thing of us – faith.  And when we mess up, when we fail to meet the demands of fulfilling our relationship with God- it is only God (the non-breaker of the covenant of our relationship) that can fix it.  And even when God demands we, humans follow certain laws for living and then we fail to keep them, even then God fixes it.  Because God never stops fulling God’s side of the relationship with us – ultimately fulfilling it for all time, restoring us to new life and new hope forever through God’s son, Jesus Christ.  To be loved like that- to be restored like that– to be forgiven like that – how can we not be what the psalmist and my son Griffin declare boldly, “Happy!”

Thanks be to God.  Amen.