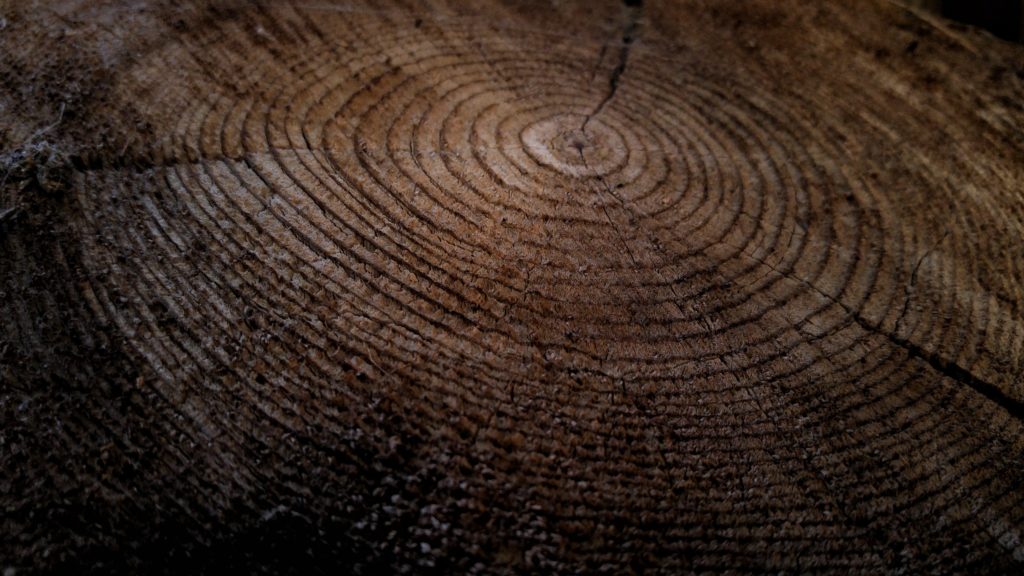 What to make of a Stump

Growing up, my parents spent a lot of time outside doing gardening and landscaping projects all around my childhood home. I dreaded the times when it was my turn to mow the lawn because there were so many trees, bushes and gardens to avoid and you didn’t want to accidentally mow over something that wasn’t supposed to be. We had frequent wildlife visitors, including deer and a bunny family that lived under our shed for years. The year the bear ate all of the apples from our apple trees and took down several big branches was a memorable one. There was one tree right in the middle of our backyard that was planted before we moved in that never looked very good- one side of it had died off and never sprouted leaves, so finally one spring my dad decided to cut it down, hauled away all the branches, but left the stump.

The following year it sprouted again and after that it regrew into a bush. Years later that stump has become a full grown tree, even bigger than it was before it was cut down. Nature is resilient in so many ways. Remembering that old stump and how it regrew, I did some research on how common it is for a stump to regrow like that. It depends on the kind of tree of course, but it isn’t uncommon for a tree to regrow after being cut down and in fact many people have tried all kinds of things to kill stumps without much effect. Maybe that is why the imagery from this passage in Isaiah worked back then and still works today. Seeing a stump with a sprout of regrowth coming out of it isn’t out of the ordinary for us. And in fact, if it is being used to describe the history of a group of people, it reminds us of the kind of stubborn, resilience we, human beings can have when people try to cut us down to size.

During Isaiah’s time the Israelites were threatened over and over by enemy forces. In this part of Isaiah it is the Assyrians that they are most afraid of. The Israelites had been overtaken before and probably would be again, but that didn’t mean they didn’t still hope for a king who could rule with the anointing of God. Israel had some good kings already and some not so good ones, but they were still waiting for a better one- one who could change history and remove the ongoing threats they faced. When we read this passage as Christians, we automatically think of Jesus, but it is describing not only Jesus but also other rulers of Israel, the faithful ones- who lived following the laws of God. Isaiah is talking about hope here. Hope not in some distant future, but here and now when hope is what is needed most. We put our hope in God because we know who God is for us- a God who never gives up on us, never lets go of us and keeps loving us when we don’t deserve it. A Messiah, an anointed king, who can make God’s kingdom real on earth is the ultimate hope.

And this kind of ruler’s power would go beyond humanity and out into the whole creation, when all living things would share in the peace that passes all understanding. The peace that comes from God. The very biological instincts of animals would be changed during this king’s reign. Lions would become vegetarians, wolves and lambs would be friends and babies could be snake handlers. These peaceful relationships between species compels us to also believe that peace is possible within our species. All of humanity would have no need for violence or war because if wolves and lambs can get along, then certainly 2 people can too. When we sing about peace on earth and good will to all, when we ponder the Christmas spirit and who the Christ child was born to save, when we step back and live into the hope that comes from this holiday- this passage of Isaiah is what the hope of the kingdom of God looks like.

We continue to hold traditions around the season of Advent and Christmas that encourage us to take this dream of peace seriously. One of the most important traditions in our culture is gift giving. We give one another gifts to spread joy, to share love and although we don’t always put it this way, another purpose is to restore peace. The peace that is described in this scene in Isaiah is part of the vision for the kingdom of God that we believe Jesus brought into the world when he was born and we continue to wait for in his return when the fullness of that vision to be made complete. The word peace is one we hear a lot around the holidays, it is certainly a word that gives us hope- we want peace between nations and peace between people, we want peace between humans and the environment.

We know that peace means an end to conflict and war, but in the Bible the word peace also means: to be made complete. To be restored to wholeness. To share peace with someone is more than just saying- I am not going to hurt you. It is the hope that God will make that person or that part of creation whole again. It is an act of healing. When we share gifts at Christmas, sharing peace is part of it. Not that the thing, the stuff is so important it can make someone whole, but that by caring for one another, by restoring our relationships, by showing we love each other- we are letting go of conflict and working together toward healing, making complete what God longs for us in this world- true peace. Paying attention to the needs of others and all of creation is an act of peace.

The Story of Saint Nicholas

A couple days ago on December 6 is a holiday in the church-it is known as St. Nicholas day. This is one of those saints whose story has a life of its own. But the original is all about a man who was born with a large inheritance, although an orphan. And he spent his life generously giving to others. The story goes like this: a family in his community was in desperate need- the daughters of the family were in danger of being given into prostitution or other terrible fates because their family couldn’t care for them. So, St. Nicholas gave them money (allegedly tossed through their window or in some versions down their chimney) ultimately saving the family and especially the daughters from a terrible life. His gift was more than just money- it was one of peace, of restoration, of hope for a different ending- for this family’s fate.

None of us are strangers to the stumps of life. The times when either we cut down or someone else cuts down the things that are prospering in our lives. And when its gone, we long for a new creation to take its place, we hope for reconciliation and healing, we want new growth where there is death and despair. The kingdom of God Isaiah describes is part of this beautiful vision for us too. Where not only an end to war and conflict is possible, but where true peace can make us whole again. The holidays aren’t always full of joy and peace, we know this. Life continues- grief doesn’t stop just because its Christmas, sickness, unemployment and hurt doesn’t take the day off. But Jesus Christ came into this world to bring peace. This passage reminds us, we have permission to believe in the hope that comes from God. The true peace of Jesus Christ, the peace that restores us, the hope that helps us carry on- where the poor and meek are cared for and treated well. We wait, we hope for things to be better because that is what God promises, and we know our God is faithful, loving and can bring healing where there is brokenness. Whether it is righting the relationships between cows and bears, babies and snakes or person to person, God restores us to wholeness bringing about new possibilities we never dreamt of before. All that’s required of us, is to simply believe.

May the God of Hope who brought the Prince of true peace into this world continue to give us the spirit of wisdom and understanding, the spirit of counsel and might, the spirit of knowledge and the fear of the Lord, now and forever.