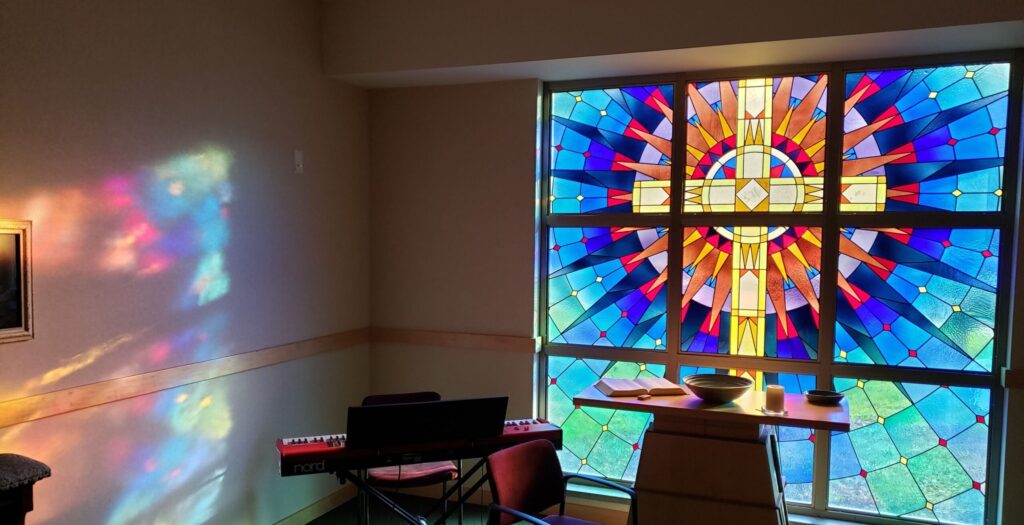 “We do not grieve as those who have no hope,” Paul says to the Thessalonians. Yet we still grieve. I saw it with my own eyes and felt it in my own heart within the last couple days as I officiated several small funerals for loved ones from our church.

When death takes someone you love, you grieve. Grief is normal, natural.

Coping with the death of a loved one, grieving, is also work. You don’t feel better in a matter of days or weeks. It takes time. It takes effort. The grief lessens but never completely goes away, does it?

Thinking about our church community, I figure more than 75% of us are grieving on any given Sunday. That’s why we shed tears sometimes in worship. That’s part of why we miss being together so much right now—we miss being able to check-in with each other in person to offer comfort to each other as brothers and sisters in Christ.

Grief is just one of those common denominators we all carry with us. At any given time, grief has a grip on some of us more tightly than others.

So here in this portion of his 1st letter to the Thessalonians (1 Thessalonians 4:13-18), the apostle Paul acknowledges, like any caring pastor speaking to new Christians in his care, that his people grieve. His words are also to us.

We grieve, Paul says, but “we do not grieve as those who have no hope”. Hope in what?

As Christians, we hope that the same God who raised Jesus from the dead will one day raise us too. Just as Jesus Christ was brought out of death, some day he will take us out of our own death.

We believe in a God who sent his only Son, not only to live a human life like ours, but die a human death like ours. Jesus died, just as we most certainly will. But God brought Jesus out of death to life everlasting, promising that we too will be brought from death to life because of him. Just as God came close to us in Jesus’ humanity, that closeness doesn’t end in death.

Our Bible reading tonight holds some vivid images. The archangels call, the sound of God’s trumpet, believers caught up in the clouds to meet the Lord in the air. Paul is using apocalyptic language in remarkable images, trying to describe something that is difficult to describe.

He’s trying to describe how amazing it will be when Jesus Christ comes again. But if we spend our thoughts literally trying to figure out how these images might be real, or if we go in the wrong direction here thinking that Paul is speaking about who will go to eternity and who will not — we lose Paul’s real point.

Paul is writing to this young church only 50 some years after Jesus’ resurrection. The belief that Jesus’ return was imminent was a belief Paul preached. The people of the church in Thessalonica had come to believe Jesus was coming again at any moment.

The issue that arose since Paul planted the church in Thessalonica, was that some among this community of believers in Thessalonica had died. The Christians still living in this congregation are now worried that their family and friends who have died will miss out on the return of the Lord and the resurrection. As this church was grieving those among them who had died, they were on the verge of losing hope. They worried that Jesus would not include their loved ones in the resurrection when he’d come again soon.

The dominant cultural belief was that once you died, you were done. And you were separated from your loved ones forever. Grief is profound when this life is the only one you believe you are living for—and it ends in death.

In opposition to these cultural thoughts, Paul assures Christian believers – then and now – of several reasons to have hope.

First, when Christ comes again, those who believe in Jesus who are alive and those who have died in the faith, will be caught up together with the Lord. We will be united with the Lord and with each other.

Second, Paul is writing this to encourage believers. How often is this passage in the Bible used to scare people about the rapture, so out of fear they might come to faith?

And third, this hoped-for event is especially encouraging, because those who meet the Lord will live with him forever.

We don’t know the actual details of how it’s all going to happen, but what matters is that Christ will gather the living and the dead one day when he comes in glory – and we will be alive together in Christ forever! We’re to encourage one another with these words.

With this hope and encouragement, we’re to press on with our lives in faith. That’s also the point. The time between Jesus’ resurrection and his coming again isn’t just one big empty space where we’re to hang out biding our time just looking up at the sky.

We’re to live in encouragement and hope, in spite of our grief, facing the difficulties in life, and its joys, as the people of Christ God is shaping us to be.

I hold two beautiful cross generational snapshots in my mind this week. I’ll close with those and trust that you will find them hopeful and encouraging too.

The first was looking at photo board displays for a funeral I officiated outside at Gunderson Funeral Home on Friday. Gail Nelson died and her family held a small funeral. Gail was a woman in her early 60’s, a long-time member of our church, who lived with disabilities all her life. In spite of her challenges, Gail’s heart was huge. She shone with the love of the Lord everywhere she went.

I had been remembering Gail’s parents as I had prepared for Gail’s funeral. But I had forgotten about Grandma Tillie. For you see, Grandma Tillie died decades ago. I had forgotten about her, until I saw the pictures. The pictures, especially one, of Gail and Grandma Tillie together. In Tillie’s last years of life, she and Gail were nearly inseparable. They shared such joy together. In the grief of Friday, there in that picture of Gail and Grandma Tillie, all of us could positively feel the hope of a great reunion of two beautiful light-filled and loved-filled women reuniting one day in the Lord in the end of time.

The other image was of a baptism this week. We saw a wonderful baptism tonight. But on Sunday we’ll see another one. It will be for Alice Panzer. Alice is almost 1 year old. We had to put her baptism on hold after she was born, due to the pandemic. We finally gathered with a small number of Alice’s extended family on Sunday, masked and cautious, but joyful.

Alice is named after her great-grandma, who on Sunday, was also in attendance. What a joy to see Alice’s extended family of faith.

The most joy-filled moment of little Alice’s baptism, was after she was baptized. One-year-old Alice loves water. So, as her parents posed for pictures around the baptismal font, Alice reached down and got her hands completely plunged into her baptismal waters! Smiles and giggles from little Alice and everyone followed. That little girl just couldn’t get enough of her baptismal waters. And as she was rejoicing in getting her hands wet, we welcomed Great Grandma Alice over to get a closer look.

Such smiles and joy!

Such hope. Such encouragement.

We are all caught up, all of us, in the life of the Lord. And one day after death, we’ll be caught up again together in eternity. Keep living with that joy and hope!

Thanks be to God. Amen.