From the basement of a parsonage to two locations

In his first sermon, Pastor J. Clemmons Peterson celebrated the “glorious tomorrow” that the establishment of Good Shepherd Lutheran Church would bring to a community with a bright future. A better tomorrow, he said, must first begin with the hearing of the Word of God today.

Now located at both 5701 Raymond Road in Madison and 7291 County Highway PD in Verona, “Two Locations, One Congregation” was born November 25, 1956 with Pastor Peterson’s sermon, “For a Better Tomorrow” in the basement of a parsonage across the street from Good Shepherd’s Madison campus. The parsonage, which is now a home ensconced in an armor of trees, doubled as the home for the Petersons and their three children and a temporary chapel at the time until the new church was built.

Though November 25 marked Good Shepherd’s infancy, the church wasn’t “official” until March 3, 1957. In between that time, the church held their first family night, had a small Christmas Eve service, debuted its Sunday School program, and had its first youth confirmation class, and averaged approximately 46 people per Sunday service. With Good Shepherd’s formal introduction into the community, the church became the second Augustana Lutheran Church in Madison. That day, 53 adults and 33 of their children committed themselves to helping grow the church. 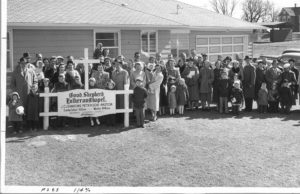 Aside from Pastor Peterson, the church was being run entirely on a volunteer basis. As the church grew tremendously and was bursting at the seams. By early 1958, plans for a two story, three-unit campus design were drawn up for across the street. On Sunday, May 24, 1959, the final Sunday service was held at the parsonage. By the end of 1959, the congregation had swelled to 292 baptized members. Of those members, 132 of which were at the age to receive communion and 112 children were attending Sunday School. Even with the added space, the church had to expand from one to two Sunday morning services and hold Sunday School in the parsonage.

The rapid growth called for another expansion. In 1962, when service attendance averaged 229 people, the board approved the addition of a second unit. The second unit was dedicated September 26, 1965 and opened to the community October 17,1965. The new building included the church’s first pipe organ, a 14-rank Wicks purchased from a local radio station, and a new cross, which was initially dubbed as controversial for its artistic design but still hangs in the chapel today.

The accelerated growth of the church also welcomed a new era of liturgical style and service format, which echoed the growing youth movement. The Good Shepherd youth group formed a folk music choir (the Groovin’ Good Shepherd Good Time Gang), which rose to popularity not only among churchgoers, but also across the Midwest. They went on tour both locally and to congregations in Illinois and Indiana. With this, Good Shepherd welcomed two Sunday evening worship experiences, one that featured folk music and the other with a more traditional feel but with “modern” music.

Once again, Good Shepherd needed to assess their capacity needs – as the church approached its 15th anniversary, committees were being formed to address the insufficient space for Sunday school classrooms, fellowship hours, the children’s nursery, and more. But as with the last two projects, money became an issue. The committee decided to divest from the parsonage and grant Pastor Peterson a housing allowance in 1975. The third unit was showcased March 6, 1977.

Though church attendance had its ups and downs throughout the 1970s, membership itself had steadily climbed. By 1981, church membership had flourished to 400 members. That may have been in part because of a plan to emphasize the friendliness of the congregation. “Ask Me About Good Shepherd” persons greeted newcomers with a goal of making everyone feel valued and welcomed. There were also changes in the format of the liturgy itself – on the first Sunday of the Advent in 1978, Good Shepherd premiered the new Lutheran Book of Worship, the first congregation in the Madison area to do so. Earlier that year, Good Shepherd also hosted a synodical conference on liturgy which dealt with the modifications of the Lutheran book of Worship. 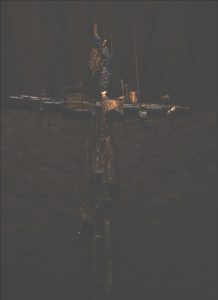 And as the 1970s marked an era of social activism and tumultuous politics domestically and internationally, Good Shepherd’s Social Ministry Committee grew prominence. The program sponsored a group of Vietnamese refugees in 1975 and participated in a Cuban refugee ministry in 1980. The 1980s brought change locally, as well. Shortly after the church’s 25th anniversary, Pastor Peterson retired after 29 years, and Good Shepherd became a pioneer of church computerization – a feat that came with both awe and frustration (Pastor Peterson quickly learned that the “delete” key to be a blessing and a curse – on more than one occasion, he pressed it and lost most of the sermon he was writing).

With Pastor Peterson’s retirement, Pastor David Swenson took over and found that he was amidst a thriving and growing Christian community – one that, once again, pressed the church’s space to the limits. By mid-1990, Good Shepherd had expanded to include a second level to the education wing. Despite all these expansions, church leaders still wanted Good Shepherd to have a “small church” feel where members could interact one-on-one with each other for a more intimate environment and where newcomers didn’t feel intimidated by the church’s now vast campus.

By that time, Good Shepherd grew from a church to a blossoming and tight-knit community. By 1995, Good Shepherd began the process of creating Little Blessing Preschool, an effort that recognized the 378 children that were a part of the preschool. Moreover, Pastor Sheryl Nielsen announced her engagement to David Erickson. When planning the wedding, Pastor Nielson was conflicted over whether to have an intimate ceremony or invite the whole congregation. She opted for the latter and in April 1993, Good Shepherd hosted the wedding of the century.

In developing its fifth unit a few years later to once again accommodate for the growth, the church council adopted recommendations to acquire a quality tracker-type expandable and moveable organ, expand the front area of the nave, and open up the expanded seating in the balcony area. Concurrently, to address the projected membership expansion, the church approved a new vision statement: “A growing community reflecting Christ on Earth.” 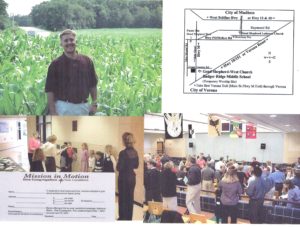 Part of that vision statement was about planning and envisioning a future for its members. By the late 1990s, the Madison community had stretched southwest to the borders of Fitchburg and Verona, populated by an influx of younger newcomers who wanted a range of programming that would fit all their family’s needs. With new members coming in droves, Good Shepherd looked to expand once again – but this time to Verona, made possible by a generous donor. Good Shepherd-West was dedicated June 22, 2003. The future was in one congregation, two locations.

The glorious tomorrow that Pastor Peterson spoke of in his first sermon had come true. As he stood in front of the original 56 people that nestled into the full basement parsonage, he said “…we are looking for the glorious tomorrow when the church here in this community shall have been an important witness in the preparing of lives for eternity, so that as we worship, as we grow, our faith in Christ may continue to be perfected. We look to the time that we as a congregation shall take our place in bringing a genuine witness of Christ to all in the community.”